When remodelling your home, it pays to have clear vision and for Mel and Neil of Whitnash, the new family kitchen was always a major discussion point.

The couple had heard about Modern Homes from a friend who’d previously had a kitchen and bathroom done. Neil also worked with Tina’s (the owner of Modern Homes) husband, so the combination of the two recommendations interested them enough to pay a visit.

On this particular job, Mel and Neil already had builders and carpenters in place, so our role was specifically kitchen design and supply (including appliances). Mel came with some good ideas of her own as to the new layout and after discussions, we made a few suggestions to the original plans.

“It was a major refurbishment,” says Mel. “At one point, there was no back wall to the house and all the internal walls had gone too. However the ideas we had kept us going – we knew in the end it would all be worth it.”

“I’m so glad Tina came up with the ideas she did,” says Mel. “Had we stayed with our original plans, we wouldn’t have had enough cupboards and the flow wouldn’t have felt right. Happily though – it’s all perfect and we’re delighted with it.”

Now the overall feel of the kitchen is modern but very warm and welcoming, with a timeless look that won’t date easily.

“I love so many things about the kitchen,” says Mel. “The peninsula is beautiful and hugely practical – there’s so much room to put things when I’m cooking, rather than having to squeeze round chopping boards and appliances. The induction hob is a big hit too. It’s even better than cooking on gas (which required some converting from Tina).

“The two full sized ovens also make baking a real joy. The bottom oven also has a steam function, which I don’t use often but it’s really useful when I do need it.  We’re really happy with how everything turned out and the ‘wow’ factor is definitely there.”

To christen the kitchen officially, they recently held a Thank You party for the neighbours, which garnered lots of admiration. “Our ‘hotel house’ is now complete,” says Mel. “2016 was all about work, and we’re looking forward to 2017, relaxing in our new-look home.” 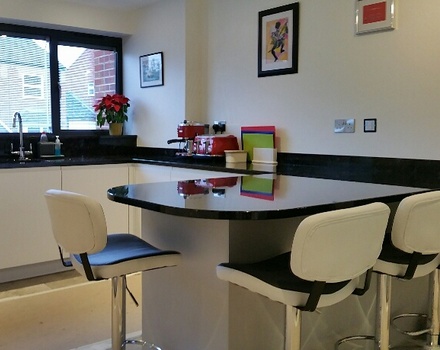 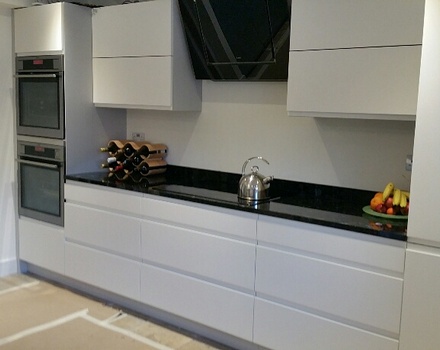